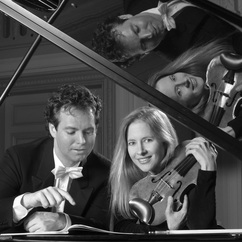 The Violin Piano duo of Michaela Paetsch and Eric Le Van (web) has appeared in recital through out North America and Europe.  In a recording for the Tudor label they re-introduced the neglected music of the once celebrated 19th century composer, Joachim Raff. The performances of Raff's Sonatillen and Six Morceaux de Salon were praised by the distinguished broadcaster, composer, and former host of ABC's 20/20, Hugh Downs, who said, "I am impressed! I enjoyed Raff's compositions, the composer's style as well as the skill and sensitivity of the performers."  (CD at ArkivMusic) (listen at Audio)

"Eric Le Van's pianism is mesmerizing. It has everything: sensitivity, expressive tone, shading, superb finish, and faultless taste and style" (American Record Guide's David Mulbury).  Bryce Morrison of Gramophone extolled him as "a brilliant pianist, youthful, ardent and communicative, magically fleet and affectionate.”  Born in Los Angeles, Mr. Le Van made his debut there at age sixteen in a program of Brahms, a composer with whom he has a special affinity. After studies at the University of Southern California, he entered the master class of Rudolf Buchbinder in Basel, Switzerland. Shortly thereafter he won a Fulbright scholarship to continue his training with Professor Karl-Heinz Kammerling in Hanover. For several years he lived in France, where he was Artistic Director of the International Franz Liszt Festival.